Jennifer is a nine-year-old, declawed tabby cat who lives with her person and two other cats in a Toronto apartment. Her person hoped that TTouch would help Jennifer to overcome her extreme fear and lack of confidence.

Before Jennifer was introduced to TTouch, she spent much of her time hiding behind or under furniture because so many things frightened her. She was terrified of strangers, loud noises, unfamiliar voices and new experiences. She would literally shake with fear. The two other cats in the household bullied her. Jennifer hugged the walls when she walked from room to room and always kept a safe hiding place within her visual range, just in case. She would quickly run from one safe place to the next, hardly daring to be out in the open for any period of time. After a fright, it would take most of the day for her to calm down and feel safe enough to come out into the open again. Jennifer avoided direct eye contact with people (including her own person), daring only to throw quick glances in their direction. She held her body in a tight tucked posture.

When I started working with Jennifer, she was also receiving medical treatment for a small hole in her heart and for high blood pressure. She was on medication to reduce her heart rate in order to take some of the strain off of her heart. Jennifer’s person hoped that TTouch would also help calm Jennifer’s heart rate and make her more relaxed overall.

At the beginning of my first session with Jennifer, she needed to be brought out from behind the couch where she had been hiding. This took some time since she would continually try to run and hide somewhere else. Once she was brought out of hiding, I gently started working with her, using primarily the Chimp TTouch as well as Ear Strokes and Hair Slides. Jennifer was extremely fearful and tried to bolt and hide at every opportunity. Her posture was guarded, her tail was clamped tightly against her body and she kept her paws tucked under her body. I needed to contain her while I worked with her or she would try to run and hide.

Once the session was over, Jennifer immediately bolted and hid behind the couch again. We closed the door to the room in which we were working so that Jennifer could be quiet and undisturbed while my client drove me home. Upon her return, my client found Jennifer at the door of the room, waiting to be let out. This was very unusual. Normally, Jennifer would have continued to hide behind the couch for several hours before daring to come out. This time, her behaviour was surprisingly different. Following this first session, my client noticed that Jennifer was much calmer with the other cats in the household.

Two weeks later, I had a second TTouch session with Jennifer. Although she still hid behind the couch at first, Jennifer relaxed quickly once I began working with her. Before long, I was able to work without containing her and Jennifer stretched out on my lap while I continued doing the TTouches. I continued to use the least threatening TTouches. Jennifer still would not let me touch her paws and her tail remained very tight. Despite this, for the first time, Jennifer showed an interest in what I was doing.

After this session, Jennifer sat quietly near the door of the room instead of bolting and hiding behind the couch. Once the door to the room was opened, she left the room, but voluntarily returned a short time later. My client was delighted with this new behaviour. A week or two after this session, Jennifer remained calm during a thunderstorm, whereas before she would have been jumpy and anxious.

With each subsequent TTouch session, Jennifer’s behaviour and confidence continued to improve and I was able to expand my TTouches to include those that involve more direct hand contact. However, the real turning point for Jennifer seemed to follow one particularly memorable TTouch session. During this session, I was able to do some concentrated Raccoon TTouches all over Jennifer’s paws and in-between her pads. Jennifer had always been extremely sensitive about having her paws touched (I believe, partly because she is declawed and partly because animals hold fear and tension in their feet). As a result, I would usually work with her paws in short increments. This time, however, I was able to work extensively with her paws while she relaxed. 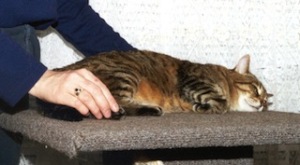 As I did the Raccoon TTouches on the tips of her toes, I felt a sensation like electrical sparks coming from the ends of her toes. I knew that something significant was happening. Because I do other energy work, I suspected that this was an energetic release of some sort, but continued with the TTouches and just observed what was happening. The electrical spark sensation lasted for a few minutes as I continued to do small Raccoon TTouches on Jennifer’s toes and as I moved each toe in a TTouch circle. Following this session, Jennifer’s confidence and calmness grew in leaps and bounds.

I continued working with Jennifer every few months for over a year. One day I got a call from Jennifer’s person, telling me that Jennifer ventured out into the hallway outside the apartment for the first time ever! I was told that when she hears strange noises, Jennifer now sits and listens before deciding whether it’s appropriate to hide. She thinks before she reacts. These days, it is rare for Jennifer to hide behind the couch. She plays with the other cats in the household and will meet a person’s gaze directly. 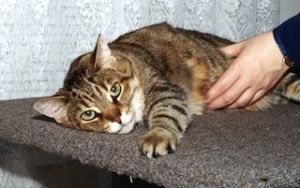 Jennifer relaxes into her treatment

During my last TTouch session with her, Jennifer jumped onto the platform where we work to let me know that she was ready to begin. Her transformation has been remarkable. Much credit for Jennifer’s progress is due to her person’s willingness to see the changes in Jennifer and to continue to support those changes through ongoing TTouch sessions. Jennifer now relaxes and enjoys our time together. Jennifer continues to explore outside the apartment and is no longer bullied by the other cats in the household. She is able to recover from frights much more quickly, is less reactive and is able to relax out in the open with the rest of the household instead of constantly hiding. Most importantly, Jennifer’s delightful personality is finally able to express itself more fully.

It’s now been over a year since I last worked with Jennifer. The most recent update I received from Jennifer’s person was in January 2004. She said that the hole in Jennifer’s heart that the veterinarian thought he could detect “seems to have sealed/healed.” In any case, it is no longer evident. Since the vet no longer feels that Jennifer has a risk of blood clotting, he discontinued the Aspirin previously prescribed for her and has also said that Jennifer’s heart medication could be reduced and perhaps discontinued.

Jennifer’s person says that Jennifer is truly a different cat. She’s full of spunk, plays chase games with the other cats, runs into the hallway when her person comes home and sometimes even meows out there. She has finally found her voice! Other people who have visited the household have noticed the incredible difference in Jennifer. They say, “She’s just so happy.”

It has been an honour and a delight to witness Jennifer’s transformation from a very frightened and stressed cat to a cat who is happy, playful and much more confident.

Back to Client Stories

Back to Tellington TTouch

Back to the top